Legacy of the Divine Tarot

What happened to Carol Daniels?


ANADARKO, Okla. (AP) — Authorities say a pastor in southwest Oklahoma was killed and her body was found inside her church.

Carol Daniels' body was found early Sunday at the Christ Holy Sanctified Church in Anadarko, Okla., which is about 60 miles southwest of Oklahoma City.

Investigators say they have no suspects in Daniels' death and few leads to follow. Authorities did not say how, when or where she died. Officials on Sunday spoke with several people who gathered around the building after hearing about the killing.

Authorities say Daniels was in her mid 50s and lived in Oklahoma City.

Her church is in a small A-frame building that sits along a main road in the Caddo County town of about 6,600 people. 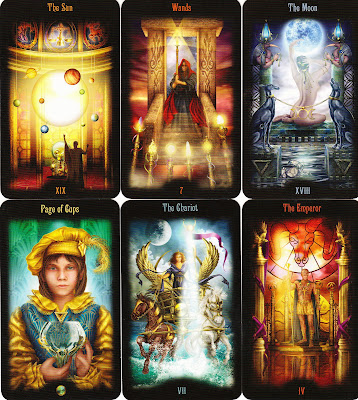 Using the new, Beautiful, Legacy of the Divine Tarot, by Ciro Marchetti, I am asking questions of the Tarot, about what happened to Carol Daniels?

In the first row of cards, my question was simply.....'what happened?' I drew the Sun, the 7 of Wands, and the Moon.

She was a 'light bearer', of the Truth. She was protecting something, or someone. Would not give the killer what they wanted. I see the Moon, which stands for Mother issues, and the Sun, sometimes a play on words...did she have a son? Or someone she thought of as a 'son?'

Second question, Who did this to you? second row of Cards....Page of Cups, The Chariot, The Emperor.

Someone she trusted, someone running away. A man and a child? A childish man? A man wanting something she had, taking it, running with it. What did he want? 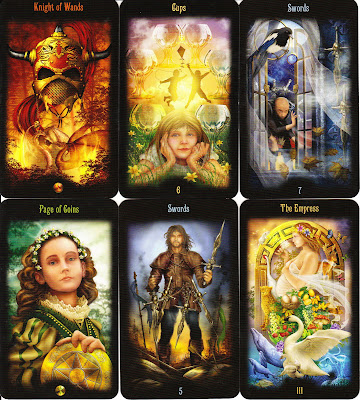 He wanted to fight for something he thought was his. The Knight of Wands, the 6 of Cups, and the 7 of Swords. Hurry, get this done. He rashly thought he deserved it, in his childishly 'fantasy' mind, he was going to take it one way or the other, even steal it. He was angry, petty, mean. A rebel.

And the last row of Cards....'What was this about, how can I solve this mystery?'

The Page of Pentacles, the 5 of Swords, and the Empress.' Again, a child and a mother. A bitter young man, full of vengeance, hurtful words, like daggers. She, never in fear, only compassion and love, a true Mothers love, understanding the pain, the anger. Offering him what she could offer, he wanted something else. And he took it. Her life. Her.

There could have been an older man, and a younger man. One watched, was a lookout for the other. Strange as it seems, I see the younger man as the angriest man. The man that killed her.

In this layout, I use sets of 3 cards. And I notice the numbers...the Chariot=7, 7 of Wands and 7 of Swords. Mystery numbers. Was this person a Mystery to her? Someone she never understood, never really knew? I believe she did know him, as she seemed to welcome him and show no fear in standing up to him. He is one the road, not there in that town. Running. The main thing he stole from her was her life. I don't see anything else here that indicates he wanted money, or items to cash into money. He wanted his mother, or a mother. And she had been that to him. Somewhere inside him is a wounded child, and she could see that, and still loved him. Her last card is the Empress...utter Compassion.

I believe he will be found, caught. His own conscience will convict him. He will tell someone else about this....a possible drunken confession, and he will be discovered. He wants help. He is desperately crying for help. He will get help, but not the way he wanted it. This group of cards, just screams....'Past life scenario.' This group of 3, have been together before. And will come back and do it again. The Moon, Emperor, Empress, Sun.....father, mother, son....going deep into the past. Not resolved this time around. And she, killed in a Church? Or somewhere else and brought to the Church? A holy place of sanctuary. Years ago, it would be the only safe place from someone that wanted to hurt you. In 2-3 weeks the truth will come out. Maybe 2-3 days. Fast. She is ok.....her soul is at Peace.

Anyone other readers out there, care to add to this post, feel welcome. I appreciate your insight, and your comments. Even negative! I am still a student...always will be. Linda

Posted by Linda at 7:48 AM 2 comments: Links to this post

Labels: What happened to Carol Daniels? 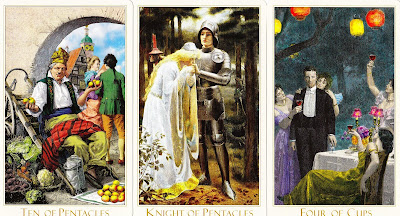 I was sent an email from the Yahoo Personals, someone was checking me out...flirting with me. So, I pull up this profile from a man named 'Fred' from Fayetteville, AR. He is 63. This is what his profile says....check it out if you don't believe it...really.

'My ideal match must love muscle cars especially since I own a Z06 Corvette 6speed. She must also not not loose bladder control easily. It would also be helpful if she were able to fit comfortably into the bucket seat. My only other requirements is that she be kind, thoughtful, open minded and have a sense of humor. (Definitely having all of her hair is a plus and be able to "dress up" for special occasions is also right up there.) Bossy, red-necked, overbearing women should not even attempt to respond.

And just for fun, I drew these 3 cards on Fred. As I have many callers, including myself, single, looking around for Mr. Wonderful.

I am using the Victorian Romantic Tarot. This is a serious romantic reading, you know. Ah, 10 of Pentacles, Knight of Pentacles, and 4 of Cups. The cards say....

This man has a lot of stuff. Property, things. Possessions. He wants a lady to bow before him, kiss his hand in homage....he is a real treat. Well, he has that fancy car, you know. What else would a single woman be looking for? And seems another woman has had an accident there....hope he had plastic covers on that thing. I bet he does now. Well, he's still shopping, not to sure if anyone will 'fit' what he wants.(Hence the fit into his bucket seat...whatever.)Has all her hair....how does he know if she has all her hair? Get a picture of her from 5 years ago, and compare hair, here? Will he obsess over the hair in the sink? Or secretly check out her hairbrush? I wonder why he hasn't posted a picture of himself. And does he have hair? Or teeth? Or is it just the 'stuff' he has to offer? Well, not really. It is his stuff. You would be his stuff. And that 4 of Cups....he would find something he didn't like about you....So what is his problem? I think the answer is in the first card. He has had someone he really loved, she was the one that helped him acquire all this stuff. And she is gone. He really wants her back...and no one can fill her dainty little shoes. And some women out here would really try to. And be never what he really wants. I'm thinking I really do like my dog....and I have so many great friends....single's not so bad.....
Ah, the dating games....how fun! He's still free, girls! Go get him!
Posted by Linda at 9:46 PM 2 comments: Links to this post