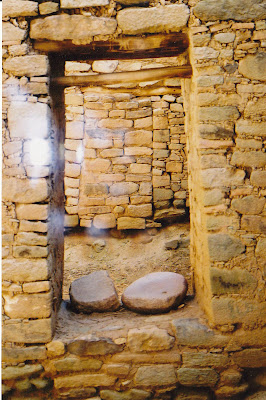 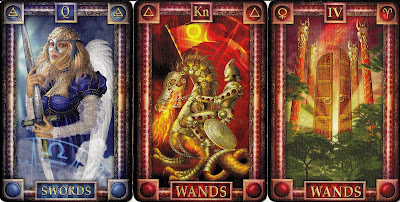 Several years ago, a man named Guy, I was engaged to at that time, and I went to New Mexico, ate guacamole every day, visited every Prayer Chapel we could find, lighting candles, holding hands and soaking up the Holy Silence, a sweet memory. We stumbled upon this site, walked all over the place. It is the Aztec Ruins National Monument. I took piles of pictures, and just recently came upon them, and found this one. Clearly you can see the white image in the picture. This was taken with a 35 mm. Minolta camera, I had not gone digital yet. And is original, no enhancements, no Photoshop. Having Ciro Marchetti's 'Tarot Of Dreams,' front and center on my desk, I just had to ask the Tarot what was in that picture? And these 3 cards came out. What a story!

The Queen of Swords, The Knight of Wands, The 4 of Wands

Do you see what I see? The white vague image in the photo almost reflects the Queen of Swords, woman with the sword held in front of her. Even in one place the light goes up and down, like the silver sword. Her white feathered wings, seem to be reflected at the outer corner of the window. Indians decorated with feathers, maybe not white, but in the afterlife, she may carry white feathers. 2 round grinding stones sit in the window. I remember kneeling down and peeking in little stone fireplaces, they had placed in a corner of each little room, to heat and cook with. Made out of the same type of rock as the building was made from. This Queen of Swords, a woman that could use a sword or sharp knife to hunt, skin, or protect herself and her children, if she had to. Or possibly is was a Prayer Stick, they used these also and decorated them. Either way it was used by her to fight a battle, and protect her famliy.

On the Knights front side, he carries a round, engraved, golden shield. Look up, on the unfurled flag, is another golden orb. Part of a symbol on a huge orb, this fiery yellow circle grabs my attention, then connects with the fire the dragon is breathing. These two, Knight and Dragon, dressed for battle, ready to go.

And the 4 of Wands card, a open door, in the photo, past the window, a closed door. What once was a door, is now filled with stones and clay mortar. And look at the strong wooden wands, they show up as sturdy poles in the door and window, to hang beautiful woven blankets with. For privacy and beauty. More wood seems to brace the top of the window.

So, when I ask the Tarot, tell me about this photo, this is what I get....

They were married, these walls, stones, all that is left of their home. She spent more time there than he, I think it was her home. He was off doing man things, riding his horse, wild and beautiful. He was younger than her, I feel like 1o months younger. He was playful, spirited, wild. She was strong, smart,  edgy, a bit of a wild woman herself. They don't feel like a quiet, boring couple. The cards feel like they were 2 passionate, talented, decorated-maybe tattooed lovers. Marriage didn't soften them, it fueled them, they fought like they loved, wildly. He died first, the last thing he seen was his horse. And the Sun, as he melted into the golden rays of the Sun. She, a widow. I do not see her remarrying, he was a hard act to follow. When he ascended into Grandfather Spirits homeland, he took her heart with him. A part of her still lingers at the window. Watching and waiting for him to come home. If those walls could speak, (and I believe they can!) these two Aztec (Pueblo) Indians gave the neighbors something to talk about. Of course, now she is with him. A glance in the door of the 4 of Wands card shows golden prisms of light, a beautiful place they rest. Talk about happy hunting grounds. They are there.

Just in case you would like more information, thank you Google, about the Indians that lived here, I am including this....
History

The Pueblo Indians are believed to be descended from the three major cultures that dominated the region before European contact:
Mogollon, an area near the Gila Wilderness
Hohokam, archaeological term for a settlement in the Southwest
Ancient Pueblo Peoples or the Anasazi, a term coined by the Navajos[1].
Historically, they supported themselves mostly by maize agriculture, although they lived in one of the more arid regions in North America. European settlement began in the late sixteenth century, but the desert surrounding the Rio Grande Valley precluded massive intrusions into Indian land until the mid-nineteenth century. As a result and despite forced conversions to Catholicism by the Spanish, the Pueblo tribes have been able to maintain much of their traditional lifestyle. There are now some 35,000 Pueblo Indians, living mostly in New Mexico and Arizona along the Rio Grande and Colorado River.
These peoples were the first to successfully revolt against the Spanish in the Pueblo Revolt of 1680, which expelled the Spanish for 12 years. The code for the action was a knotted rope sent by runner to each pueblo; the number of knots signified the number of days to wait before beginning the uprising. It began August 10, 1680; by August 21, Santa Fe fell to 2,500 warriors.[2] On September 22, 2005, the statue of Po'pay, (Popé) the leader of the Pueblo Revolt, was unveiled in the Capitol Rotunda in Washington, D.C. The statue was the second one from the state of New Mexico and the 100th and last to be added to the Statuary Hall collection. It is the only statue in the collection created by a Native American, in this case, Cliff Fragua, a Puebloan from Jemez Pueblo.
Most of the Pueblos have annual ceremonies that are open to the public. In many cases, one such ceremony is the Pueblo's feast day, held on the day sacred to its Roman Catholic patron saint. (These saints were assigned by the Spanish missionaries so that each Pueblo's feast day would coincide with a traditional ceremony.) Some Pueblos also have ceremonies around the Christmas holidays and at other times of the year. The ceremonies usually feature traditional dances outdoors accompanied by singing and drumming, interspersed with non-public ceremonies in the kivas. They may also include a Roman Catholic Mass and processions.
Formerly, all outside visitors to a public dance would be offered a meal in a Pueblo home, but because of the large number of visitors, such meals are now by personal invitation only.
Culture
Historically, the Pueblos were large communal buildings; each family lived in a single room of the building, but if a family grew large enough, side-rooms were added. Among the Jemez and the non-Tanoan-speakers, ownership of the room was largely matrilineal, from mother to daughter. Thus if a Hopi, Zuñi, Keres, or Jemez man were to divorce, he would move from the home of his former wife to the home of his mother or a sister. The other pueblos were patrilineal.
The pueblos are unique among Native American dwellings in that they are constructed as apartments, the flat roof of one level acting as the floor and front yard of the next, with ladders connecting the floors. The walls, especially on the ground level, had no doors or windows—only entrances in the roof. This, coupled with the fact that many were built on the tops of mesas, made the pueblo easier to defend from attack.
Men were expected to tend the fields. They would defend the community in war societies; tribes such as the Navajo, Comanche, and Apache were their traditional enemies. The Spanish successfully re-conquered New Mexico after 1692 by allying themselves with the Pueblo people against their traditional enemies (although events in the 1800s were to modify these political alliances).
Pueblo prayer included substances as well as words; one common prayer material was ground-up maize—white cornmeal. Thus a man might bless his son, or some land, or the town itself by sprinkling a handful of meal as he uttered a blessing. Once, after the 1692 re-conquest, the Spanish were prevented from entering a town when they were met by a handful of men who uttered imprecations and cast a single pinch of a sacred substance.[3]
The Puebloans employed prayer sticks, which were colorfully decorated with beads, fur, and feathers; these prayer sticks (or talking sticks) were also used by other nations.
Cloth and weaving were known to the Puebloans before the conquest, but it is not known whether they knew of weaving before or after the Aztecs. But since clothing was expensive, they did not always dress completely in the European tradition until after the conquest, and breechclouts were not uncommon.
Corn (maize) was a staple food for the Pueblo people. They would use pottery vessels to hold their food and water.
Posted by Linda at 10:49 AM No comments: Links to this post

Legacy of the Divine

Using the Legacy of the Divine Tarot by Ciro Marchetti, and the book 'Writing Poetry from the Inside Out', by Sandford Lyne, I write.
From each card, a word
from each word, a thought
and each thought, poem-sketching.
The World......Open
The Wheel.....Life
Temperance.....Reverence
9 of Pentacles.....Gardens
Walk the Garden's
path
reverently.
Watch tender stalks
burst
born of precious seed.
the pounding rain
the burning sun
cold, wind of change...
life.
Let the Angels
open you
tenderly perfumed, velvet petals
dance in today's light
you are beauty.
Posted by Linda at 7:34 AM No comments: Links to this post