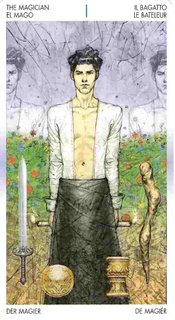 The Magician. He is talent, ability, confidence. He doesn't give up, he knows there is a way to manifest anything, anywhere, anytime. He would be a Jesus sort of guy. Walking on water is easy. Remember who you are. He does. He has a work table behind him, and each of the elements from the Tarot ot choose from, floating right in front of him. The black wrap he wears is an apron. He is busy. He has all these ideas and his mind is racing to decide which project to start on first. If I were walking into this card, embodying him, who would I be, and what would I do with his knowledge and talent....

I would dive deeper into my writing. Fearlessly bringing all these floating ideas together to create a beautiful book to live in the shelves of Barnes and Noble. A book you couldn't put down, you would drag around with you, just to see if you could absorb just one more piece of the puzzle of the Tarot, just one more, something that would change the way you know the cards and what they say. Each of the Elements of the Tarot on this Magician Card, I would use. The Wand would be the pen and the ideas that keep my up each night writing, the channeled idea flow that won't stop until it is spoken. The Cup, my fresh ground coffee, hot and steamy, sitting right here on my desk, some would call an addiction, whatever. I love it. The Pentacle, my other job to support me as I write. The already manifest miracle of living by faith & the seat of my pants (!) and trusting the Universe to support me in my Artistic Endeavors. Thank you!!!! And the razor sharp sword, the ability to cut away, decidely, everyone and anything that does not support me, love me, and bless me. All those flowers in the background, are wild flowers that I have taken photo's of. Each is a tiny splash of color and passion that suddenly appears and then is gone. A lesson from this card, when the door of oppertunity opens, RUN through, and embrace each chance to express the Divine Artist within yourself. Have fun with it, play, laugh, and create. The Magician would be your Muse. I think the only things we leave behind us, are the things we create. Relationships, Art, Homes, Careers, Families. The David Cooperfield version of you, in your own story. Who are you and what have you created? And why not? Get busy.....
Posted by Linda at 7:51 AM No comments: Links to this post

This is the Fool Card from the Tarot of Reflections Deck by Francesco Ciampi. I am going to start with this card, and work my way through the complete deck. I want to see how many things I can draw from each card.....

I am at the beginning, again. Every time I start over, I feel excited, afraid, stupid, punished, forgiven, who am I? And why can't I just find a place to be, or become a person I am content with, and just accept life and burrow in my little hole and refuse change? This must be a gift, somehow a gift, to start over and over and fall down and get right back up again. If I were the chic in this card, I would say...I am only taking what means something to me. Gotta go, have outgrown this gig and on to new faces, new lessons. In the little bag I carry, I have (of course!) my Tarot Cards, my Mary Kay stuff, something to remind me of each one of my 3 children, and that isn't something like a wad of gray hair, strech marks, and a worry stone, worn slick. I would choose something like...The crinkled up note Jonna passed to me in church, many years ago, after I had sang the song 'We shall Behold Him.' The note said, 'you really did good, mom.' Like she just noticed I could sing.... And a picture of my daughter Anna, holding her first baby. Ah, I cry to think about it. That look of love that only another mother would understand. A holy bond we share. And from Josh, a snapshot of us together in a church, the colored windows bathing us in prisms of colors. We were deep in conversation, and the looks on our faces were like we were the only 2 people in the world. It was a Holy moment, caught on film by a stranger that developed it and gave it to me as a gift. It was on my refrigerator when our house burned down. When I walked throught the ashes, it was still here, black and curled, I didn't care. It was etched in my heart. That would be there with me. 2 tiny perfect arrowheads, my father gave me. He collects them and cherishes each one. His way of saying he loves me? Perhaps. I know we don't speak the same language. Maybe the language of the heart has no words. It speaks through your eyes. I heard you, dad. No doubt, I could go on and on...the key to the backdoor of my girlfriend Janice's home, the day the house burned. A tiny key, I will never forget. A home for a few months. A safe place to sleep, cry, question, 'start over', which is what the Fool Card is. Sometimes big starts, sometime little tiny steps. It all counts. She has learned to travel light, and the white lily, a surprise lily, no doubt. Just when you think you have no hope....this beautiful lily springs up, overnight to remind you that life has surprises (good and bad!) and you never know what lies around the next bend in the dusty road. Trust, and enjoy the journey. See you on the path. Linda
Posted by Linda at 9:18 AM No comments: Links to this post 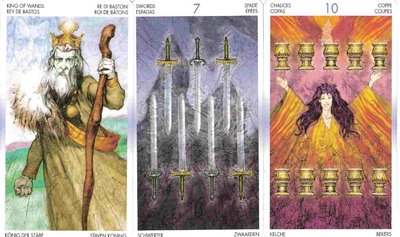 This is the Tarot of Transformation by Francesco Ciampi. I love these cards, they are soft watercolors, yet very detailed and easy to read with.

The story this group of three would tell is....

I see a man of pride and dignity. He stands firm in his belief that good things come to those who wait. He is also a man of action, it appears he has hit the wall in pursuing his goals. This 7 of Swords is blocking him from seeing that the happiness he desires is right around the corner. Maybe the Swords are fears, ghosts from the past, haunting lines from the naysayers reminding him that what he wants, he will never have. Whatever. He refuses to believe that, he grasps that staff with one hand and his other hand is a firm fist. He will not be stopped. Maybe the timing has been off and he has just had to wait. That dark night of the soul that we all encounter and just love. If, just if, he can keep believing, and I think he does, there is the happy ever after card. The 10 of Cups, time to laugh, dance, shout. Time to relax and let down all defenses, as he is home free.

He appears to me as a guide, a friend that keeps the faith no matter what. The dark card would make me want to go take a nap and wake up when everything is all better. Just fast forward to the happy ending. But no. Life won't let you. You have to ride out the storm, earn the joy. And it is so sweet, when it finally gets here. So worth it. Don't give up. No excuses. Think from the end. Imagine what the outcome could be, should you really get your wish. And just hold that thought in focus. He guides you. I beileve we have Guides around us constantly. Angels, loved ones from the other side, people that are divine, right in front of us. We are never alone. Nice to know that. Just watch and see who shows up in your life this week, surprising you with happiness..........
Posted by Linda at 7:46 PM No comments: Links to this post

BALTIMORE - Rescue crews using helicopters and boats searched 100 square miles of the Chesapeake Bay for a prominent publisher and former diplomat whose sailboat was found empty and drifting in shallow water.

The search for Philip Merrill, an experienced sailor and chairman of the board of Capital-Gazette Communications Inc., continued early Monday, two days after he disappeared.

"As time goes by, chances of survival are less and less," said Col. Mark S. Chaney, superintendent of the Maryland Natural Resources Police.

Merrill, 72, had taken his 41-foot sailboat, the "Merrilly," out alone Saturday. He typically followed an 18-mile round trip without wearing a lifejacket, Chaney said.

Two boaters found the sailboat adrift Saturday evening near Plum Point, about 25 miles south of Annapolis and 40 miles south of his home in Arnold, and called police, officials said.

Rescue crews believe Merrill likely fell overboard since his wallet was on board and there was no damage to the boat, officials said. The wind was gusting up to 25 mph on Saturday, creating conditions that could be difficult for a single sailor alone, Chaney said.

Merrill's family issued a statement saying he had been an avid yachtsman since he first learned to sail at age 7.

"If there was anyone who could captain a boat competently alone, it was Phil," the statement said. "He just couldn't resist a sunny day with the wind at his back."

Annapolis-based Capital-Gazette Communications Inc. publishes Washingtonian magazine, The Capital and five other Maryland newspapers. Merrill took leave from publishing in December 2002 to be president and chairman of the Export-Import Bank of the United States. His term expired last July.

He served as assistant secretary-general of NATO in Brussels from 1990 to 1992 and from 1983 to 1990 he served on the Department of Defense Policy Board. From 1981 to 1983, he was counselor to the undersecretary of defense for policy. In 1988, the secretary of defense awarded him the Medal for Distinguished Service, the highest civilian honor given by the department.

What the Tarot would say about this....

I laid out cards from the Tarot of Reflections by Francesco Ciampi, after trying about 10 times to post the pictures of the cards ( in case you are wondering why I have not been writing in my journal here, this is why....very frustrating to try over and over to post images and take the time to write, and have it not be posted or some malfunction and it disappears mysteriously. So.....bitchy today, yes I am.) I drew the Star, the 8 of Swords, and the Fool, on the question of 'what happened to Philip. And I drew the 5 of Wands, the Lovers, and the Death card on the question, 'Where is he right now?' My reading....(and hopefully I can get the cards to post so you can see the images....)

He was having a glorious day, alone, when suddenly gripped by pain, he knew what the pain meant, but kept on sailing, foolishly thinking it would go away. It didn't, and quickly he fell into the water, the place he loved the most, leaving this world. The pain was across his upper chest and neck, a stroke perhaps. I believe he knew he had a short time here, and wanted to be where he loved, on his boat on the water. I see no foul play, I see a very independent man that was fearless and lived life to the fullest. He died where he chose to die. He is happy.

After one last try to post the images, I give up. I will be back tomorrow, watching the news to see the outcome of Philip's story......
Posted by Linda at 6:02 AM No comments: Links to this post