FILE - This file photo provided Oct. 4, 2011, by the Kansas City, Missouri Police Department, shows Lisa Irwin. Police and federal authorities have been searching extensively for Irwin who was 10 months old when her parents reported her missing on Oct. 4, 2011.
Someone sent me the question, of why I had not done Tarot Cards on what happened to Baby Lisa. I had, but had not posted them. As a Card Reader, you cannot have an ego....and this is so close to home, and so sad, it has personally bothered me. So, tonight, I started over, and ask again, the same questions, which I shall post, and tell you what I see. Also, I used so many cards, I only put the first 3, and the last 3 on here. I will list, beside the questions, what the others were. I am using the Initiatory Tarot of the Golden Dawn, by Giordano Berti, sold by Lo Scarabeo.
Is Baby Lisa Irwin alive? 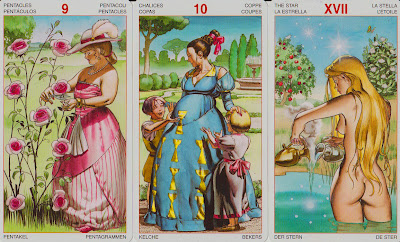 Yes.  Very much alive. I see a wealthy woman, that has everything except children. The next card, show children around her, happily, a loving mother. I think the Star Card, represents Lisa herself, sometime in the future, a grown woman, beautiful and innocent. Never knowing what happened to her as a baby.
This is the story I got from the cards, questions I ask, and the cards I drew.
'Who took her from her bed, from her home the night she disappeared?'
Justice, Strength, and the 10 of Wands. I really studied these cards....and prayed over them, what is the answer? I seen an animal in each card. Not showing up as a person, I see an animal...and someone familiar with the Justice system, or the jail side of it, strong and fierce, very angry, and being controlled by another person, he did not work alone.
I ask, 'was it a man or a woman that took the baby from her home?'
I drew the 8 of Swords, the 9 of Cups, and Judgement. Strangely, to me it said not her mother, she was 'out of it.' Deeply asleep, or unaware. Then I see a man, happy, with food surrounding him??? And a Judgment, or decision to do something, that night. Could he have been at the place she purchased the wine? All the cups hold fruit....fruit that could be changed into wine. She was being watched, and followed. Also, I noticed in the Judgement card, someone watching from a higher vantage point....he could have climbed at tree...or been 'high' on drugs, but high enough in distance... to see in the house and know the mother was alone with the kids, and there was a beautiful baby somewhere in that house. He could have watched the father leave for work....and known the mother was alone. He was watching her.
I also got the numbers, 28, or 29....I believe the man that took her is that age.  And also, in the Judgement card, shows a box, crib, bed, tomb, place you would sleep in peace, and a person lifting their arms up to be picked up by someone.....he knew where her room was and where her bed was. I just drew one card on the question, 'had this stealer of children ever been inside their house before?' I drew the Death card,' no.'  He had not been there before that night. And will never be there again.
I ask, 'will this child be found and safely returned to her mother?'
The Page of Wands, The Page of Swords, and the grim 9 of Swords. No.
2 People know where she really is, and talk about it. They are the two responsible for this situation. But the mother cries and is inconsolable, with no answers or resolution. A card of pain and confusion.
I ask, 'Was the mother in any way guilty of the baby Lisa being taken from the house?' No. I drew the Princess of Pentacles, the 9 of Wands, and the Magician.
It was about money, someone waiting and watching....and a Plan. Detailed plan. I really believe it wasn't a plot against baby Lisa, but a plot to steal some child in that time range, and from that city. .....like a two week window of time....and he seen that beautiful little girl, and instantly decided it would be her. She is too young to ever remember this, or ever know the truth. I believe the mother was very trusting, felt safe, and never suspected this horrid thing would happen to her baby.
These last group of cards, are the answer to the question, 'Where is baby Lisa this very moment?' Knight of Swords, 10 of Swords, and the Queen of Pentacles.
She is with other children that have been stolen, and possibly innocent people have adopted, or paid for, as this Queen has the money and is the last card in the lineup. 3 small children show up as Angels....confused and clinging together. This was not the first child he has taken. It was for money, 2 men acting together, one the child stealer, and one the child seller. One looks like a angry animal....one looks like a saintly, fatherly figure. Someone that innocent people, desiring babies would easily trust. 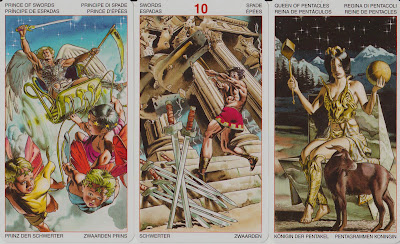 As of this moment, I do not see them finding her. I think she is in a home or will be soon, of a wealthy, nice woman, who had lost a child, and would have done anything to have another baby. So she adopted the baby. Or she will.  I ask if she, Lisa, is anywhere in the United States, and drew the Ace of Swords. Yes.....but such a double edged sword. Yes, but out of reach from her family.
So this reading sucks....other than I honestly believe she is alive and will be very loved. And never know the truth of her birth, or her kidnapping. She is a stolen child that has been sold. And the adopting Mother, does not know anything about this. She has been told some story that will fit the adopting scheme.
Update: I cannot get this lost child off of my heart, so I have ask many more questions or the cards, and used a Pendulum, for exact answers, and today, ( I posted this yesterday) I got a bit more information. She can be found, if they focus more on the man coming from the woods, and the diapers and wipes they found in an empty house close to her home. I prayerfully ask, for specific answers, and recieved this: She is in New Mexico, within the city limits of Los Alamos. She is safe, and in a waiting place. FYI, that was all I could discern today. The answers from the Tarot Cards aren't set in stone, just symbols and signs to answer specific questions they are ask. Sort of like a Spiritual Google. I will keep this subject updated....as I find anymore answers.

Posted by Linda at 7:23 PM 4 comments: Links to this post