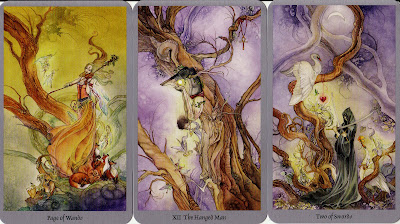 Are these not absolutely beautiful cards? Designed by Stephanie Pui-Mun Law, and Barbara Moore, the deck is called 'Shadowscapes Tarot.' And the book that comes with the deck, is awesome. Thick, full page pictures of each card, artist descriptions and intuitive descriptions. Her artwork is delicate, detailed, and full of images. And her interpretations of each card, not your usual little white book descriptions. I love it. Bought 2 sets the first time I seen it.
I drew these cards today, at random. Sit with them, waited until this story floated up. See what you think, they are the Page of Wands, The Hanged Man, and the Two of Swords.
Once upon a time,
there was a young man. Handsome, eager, zealous. Filled with faith, joy. So much, he could not hold it inside his heart, so he sang, and played music. And his music was so sweet, it was told that the music drove demons away. Demons named Fear, Depression, and Greed. Anyone that heard his music, notes plucked from stings of harps, and lyrics from his innocent, pure heart, they were relieved of whatever torturing their suffering was. He was a bit naive about the ways of the world, how life could test you. He thought he had this gift of song, and the King favored him. Life was sweet.
As time passed, he had many exciting adventures. Some, so glorious he danced in the streets, and others so painful, he wept through the long night. And he learned, this is called Life.
One day, he was so excited! He had the idea to build the most exquisite temple, a most Holy place, filled with music, gold, shimmering jewels, ah, so lovely he could hardly wait to get started on it. He sketched, and planned, he envisioned it, could almost touch it. A knock at the door, a messenger. The message was to stop. Stop his plans for the beautiful temple. Put them in a box, pack them away. Wait. It was not meant to be, for him to build this Holy house. But the messenger promised, one of his sons would build it. How sad he was. No matter how many reasons he could think of, that he should build the very best Temple, he was told no. No.
There were many great things he had done in his life, and quite a few great mistakes he had made. And sure enough, a diligent scribe to write it all down. Horrible details, everything. You have to know how it broke his heart to pack his dreams, plans for this Temple filled with music, and let them sit there until one of his sons would grow up. At times they were quite a rowdy bunch, he despaired they would ever grow up. And what if none of his sons wanted to build it, finish the vision he started on parchment paper? The Wise voice inside his heart told him not to question. And gave him no reason. No answers. Someday, it would be built, but not by him.
So, he was told to stop, pack the plans, the gold, the jewels away. Let it go. And he died not seeing it built.
This story is about enthusiasm, joy, adventure. Stop, wait. Then, no. 2 paths ahead, and both are a NO.    Ever felt like that?  Like why? And what happened? Why have the vision, and the tools and you are ask to give them to someone else?
Did you recognize the story? It is about King David, the young shepherd boy that sang to the sheep, then sang for the King. It is about his joy at building God a beautiful Temple. Then here comes the Prophet Nathan, with a message. No. Stop. Put it away. Your son will build it for Me. So he did what God ask. Sadly.
And his son Solomon did build it. Most magnificently. I believe David could see it shimmering from earth to heaven. So lovely it was. What he dreamed, started with a pen and ink, was now a vision of beauty. Done.
Sometimes it's just not our job,  and we have to let it all go. Walk away. And trust.
Posted by Linda at 7:45 PM

Linda, you are a SAGE! Happy Mother's Day. I believe this message; that sometimes you have to walk away and trust is true prophesy; I needed that today. You are an amazing reader, an amazing person and such an old soul. God Bless!

Thank you for your comment. The reading/story doesn't seem to have a happy ending, yet somehow it does. It seems like my own story. Everyone's story. Sometimes the answer is no. And it just sucks. Maybe that is the story, we may play a bit part, but someone else has the lead. And it will all be ok. Bless you today...Linda